Stocks inch higher after a day of heavy losses hangs on the minds of investors worldwide. U.S. traders react to midday reports of high than expected consumer confidence levels. Up 1.9 points from August, the consumer confidence index reaches highs that haven’t been approached since January despite the fact that YTD Dow and S&P movements have been -10.01% and -8.25% respectively. A gossamer sense of confidence comes amidst global worries of economic health where inflation and unemployment levels continue to grapple in an epic macroeconomic struggle. In the same report, the present situation index rose 5.3 points from last month marking an eight-year high with many Americans citing a preference for the current economic situation over the recent past.

Perhaps it comes from a relief period following the drastic losses. Nevertheless, the expectations decline did show a decline of 0.6 points from last month, but other than a slightly lower prospect for growth, consumers seem unsure if another recession has descended upon us. But things aren’t all that bad for consumers anyway. Gas prices are low and low levels if inflation has kept the price index very low. Nevermind the Fed speak, their dollars are stronger than ever and a painful stock market is just a necessary evil that Wall Street can fix. It’s really unclear whether the stock market actually thinks these numbers are very relevant to investing health because, in the end, the fiscal tightening is most relevant to corporate balance sheets. Either way, bearish sentiment is brushed to the side for today.

Brent and WTI crude oil both increase 1.92% and 2.03% around the midpoint of the trading session. Although, the crude gains come with very low volume statistics endangering any significance of the move. Feelings around the energy sector seem halfway wedged between the bear market and a reduction in oil output. Equity in energy companies is performing neutrally with the NYSE Arca Oil Index gaining just 0.63% and the S&P Energy Index losing -0.18%. Reflecting the equities slump removed from crude oil gains, ETFs following WTI movement have posted larger gains today with UWTI gaining as much as 5%, UCO up 3%, and OIL increases 1%. These are some of the indicators associated with WTI priced oil which is what most of the articles written here discuss. Today, I’d like to discuss some of the characteristics of the Middle Eastern (and other OPEC) crude oil market. Those following the oil glut might forget the importance of U.S. petroleum prices outside of the country even though the glut has domestic origins. One of the most important things I have forgotten to discuss is the OPEC basket price which I may begin to include in my daily analysis. Its significance is not limited to the Middle Eastern countries but all oil-exporting nations with large reserves and dependence on that natural resource for public funding. 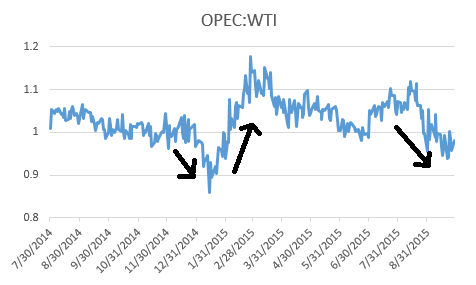 What is the measure of the fundamental balance of supply and demand in OPEC markets? The basket price which features a mixture of crude oil serviced by various member nations. Though primarily Arabic, other countries in South America and North Africa have their crude output priced using this index. This oil is typically described to be heavier and more sour than the blends represented by the WTI and Brent benchmarks. Therefore, the OPEC basket price tends to be cheaper relative to the two sweeter benchmarks. That’s not to say nations using this price are shortchanged of revenue. The oil cartel is able to keep prices at a competitive and low rate because of their low break-even points and economies of scale. Extracting oil is almost as easy as digging a hole like the old hyperbole used to say, and that is why the organization has been able to maintain such large amounts of market share. Although, that no longer seems to be the case as fracking has created a new threat to the cheap drilling about which OPEC was able to boast. The top chart shows that OPEC’s power was certainly vulnerable to the supply glut that started midway through the second quarter of 2014. Just as WTI did, the OPEC basket price experienced a new low around $40 a barrel by the first month of 2015 after decisions to not manipulate their production.
Throughout 2015, their price has experienced a similar rebound and decline that reflects the fundamental balances in WTI and Brent price. The more interesting chart on the bottom presents a ratio analysis of the OPEC basket price over the WTI benchmark price. Movement over the middle 1 shows OPEC gaining more than WTI. Movement below the middle 1 shows WTI gaining more than OPEC. During the initial and largest drop, one can see that OPEC’s price faired relatively worse than the U.S. index as it reached almost 85% of WTI midway through January 2015. This seems to be a purposeful drop as OPEC was looking to cleanse some U.S. producers out of the oil market with extremely low prices.Saudi Arabia was especially unwilling to cut production in order to show that its efficiency and low costs were superior. Unfortunately, fracking companies adjusted and fought back with low costs of their own. The subsequent rebound where the basket price outperformed WTI was perhaps an illegitimate bet that the slump would end soon; thus, allowing Saudi Arabia to increase the basket price in order to assuage member nations who were experiencing a dearth of cash in their coffers. It was especially hard on countries like the U.A.E., Nigeria, and Venezuela where the government balance sheet was in dire need of oil revenue to balance out public programs.

Relief never came, and the supply glut continued as American corporations kept pumping. Therefore, after a brief period of lateral performance between the two crude benchmarks, the basket price started to drop. This time the problem wasn’t supply but a demand scare from OPEC’s largest customer, Asian markets (especially China). The third arrow depicts a brutal fall to almost $43 (where it currently stands) after weeks of poor Chinese industrial data. After Chinese growth prospects were reduced, OPEC took a big hit and had no choice but to drop prices if it wanted to sell enough oil to keep up with the market share it wanted to preserve. As Saudi Arabia contemplates its next move and member nations plead for higher prices, Iraq’s introduction to the market threatens to neutralize production decreases from the United States. At the same time, regional conflicts threaten Arab states that can’t pad conflict with the extra black gold that usually come from higher prices. So what comes next for OPEC? It seems to be clear by now that the cartel’s iron grip on market share is loosening with every month.

As U.S. firms generate higher margins on the more attractive sweet, light crude. Perhaps, that’s why production quotas have not been introduced. But even if their plan is to produce as much as they can, new project spending is projected to go down for the next four years, from $120 billion in 2015 to just under $40 billion predicted in 2016. These spending cuts will be vital as the next few months of global weakness will weigh heavily on crude oil demand and the basket price. Going forward, these are the problems that OPEC and the Middle Eastern countries face as economic weakness pervades not only the American economy but the international equities and commodities system which is currently stuck in a bear’s nasty grip.