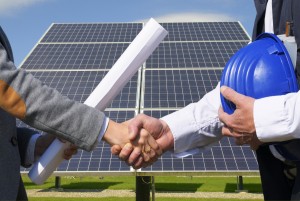 Solar Energy Is on the Rise

Both Canadian Solar Inc. (NASDAQ:CSIQ) and SunPower Corporation (NASDAQ:SPWR) were up big by Wednesday afternoon trading, which marks a strong showing in the early stages of 2017 for solar energy.

CSIQ stock was up 3.8% and SPWR stock was up nearly seven percent as the solar energy industry sees strong gains in the beginning of 2017. Since the start of the year, the two stocks are up eight percent and 17%, respectively.

Does this mean 2017 might be a huge year for solar energy? There’s a strong possibility that it might fulfill all your green tech dreams.

There was a lot of momentum backing solar near the end of 2016, with some major highlights breaking news just before the big ball dropped on New Year’s Eve.

One announcement from Bloomberg’s “New Energy Finance” (BNEF) division had some bold predictions for solar energy:

In their much touted year-end assessment, BNEF delivered a stunning rebuke to solar energy skeptics, saying that the lifetime price of solar energy is lower than coal or gas. But here’s the stunning part: solar energy is cheaper without subsidies. (Source: “Liebreich: A year of hectic change and off-target predictions,” Bloomberg, December 14, 2016.)

So projections are looking good for solar energy in terms of cost efficiency.

Next you have some really novel examples of the industry finding interesting ways to capitalize on what could be our most abundantly and reliably available power generator:

France has announced that it has opened the world’s first solar panel road, in a Normandy village.

While France isn’t exactly world-renowned for all-year sunshine, that didn’t stop the country from pioneering a novel way to both build roads and contribute to the power grid. A one-kilometer route in the small village of Tourouvre-au-Perche was covered with 2,800 square miles of solar-energy-generating panels, and was officially inaugurated on December 22 by the ecology minister, Ségolène Royal. (Source: “The world’s first solar panel road has opened in France,” Business Insider, December 22, 2016.)

The road cost €5.0 million (US$5.22 million) to construct, and will see about 2,000 motorists a day during a two-year test period. The test will focus on whether the panels can generate enough solar energy to power street lighting for 3,400 residents of the village.

Then you have more and more studies coming out in support of solar energy, pushing the idea that, not only is it poised for more growth, but at higher rates than most had predicted:

Which brings us to the most astounding claim of all: for every unit of energy invested, solar energy can now generate the same if not more energy than oil and gas. Essentially, this article portends the death of oil and natural gas has arrived. Or at least, has begun.

Of course, there are obstacles. The fossil fuel industry is worth billions of dollars and won’t go down without a fight. Governments are known to be slow when adjusting to new technologies at times, and there are regressive political currents running counter to the green tech revolution. But, according to the information revealed in this paper, it’s only a matter of time now.

The evidence is piling up that the solar energy takeover may finally crest the horizon in the next few years.

Here’s a final—and perhaps the strongest—feather in solar’s cap, and why savvy investors should not sleep on solar in 2017:

… many analysts’ projections are putting solar power at cheaper prices than coal power within little over a decade. The year 2017 is set to be pivotal in that march toward ubiquity.

In the recently passed 2016, solar power actually was more affordable than coal power in certain parts of the world, and that trend shows no signs of slowing down.

Empowered by the twin energizers of newer tech and global engagement, solar power is breaking records in terms of cost. Countries like Chile and the United Arab Emirates both had some of the cheapest energy options ever, with deals to generate electricity from sunshine for less than $0.03 per kilowatt-hour, half the average global cost of coal-generated power.

Part of the success of solar power is a function of the free market at work. Many countries are holding bids for power contracts, incentivizing companies to create the most efficient and cost-effective methods of generating energy, spurring on these green techies to produce better solar power products.

Bloomberg projects that solar could be cheaper on average than coal in as little as eight years. (Source: “Solar Could Beat Coal to Be the Cheapest Power on Earth,” Bloomberg, January 2, 2017.)